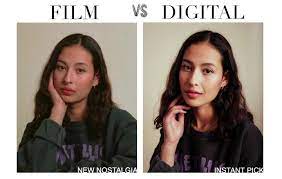 There are advantages and disadvantages to both digital and film photography, so we’ll cover those issues here. First, let’s talk about the limitations and disadvantages of each. In a nutshell, there are three main differences between digital and film photography. Read on to find out which one suits your style better. Then, decide whether you want to switch from one to the other or stick with your current method.

Comparison of film vs digital photography

A typical Comparison of film photography vs digital photography would eliminate all of the advantages of film and reduce it to a debate about the resolution of photographs. However, the comparisons between the two methods are far more complex. The following are some important differences to be aware of in order to decide which one to choose. Listed below are some pros and cons to both methods. If you’re in the market for a new camera, a digital camera is a viable option.

One of the biggest pros of digital photography over film is its cost and convenience. Although it’s not as affordable as film cameras, you’ll save a lot of money on the equipment. Buying a new camera can cost you hundreds of dollars, but you can also buy a more basic one for under $100. This will save you money in the long run. But if you’re just starting out with photography, film may be better.

Disadvantages of film vs digital photography

Although the two forms of photography are similar, there are some distinct differences. For instance, digital photography does not require processing, so you do not need to worry about using toxic chemicals or waiting for your images to dry. Additionally, you can take as many pictures as you want, and you can even reuse your storage media. On the other hand, film photographers have limited shooting options and are required to pay a fee to have their images developed by a lab. Ultimately, you may want to decide what type of photography you want to do and how often.

Film photography is an ancient form of photography in which photographs are taken by exposing thin plastic materials to light. The material is coated with silver halide crystals, which when exposed to light develop and produce the final photograph. Film photography is the original medium of photography, and it has held its popularity among photographers ever since the invention of the camera. However, it is not without its drawbacks. Here are some of the most notable differences between the two.

Limitations of film vs digital photography

While digital cameras are often easier to use, film has its drawbacks, as well. For starters, shooting film requires a lot more intentional composition, and the cost of developing film can be very expensive. In addition to this, film requires a lot of time to process. Digital photography is much more convenient because of its instantaneous reviewing of shots. This makes film a more appealing choice for certain types of photography, such as weddings and family portraits.

Film has its advantages and disadvantages, though it still has more applications than digital. The biggest difference is cost, which is often a big concern for photographers. Digital cameras can be very expensive, especially if you’re not used to using them. Film also costs a lot more to develop and print. Most large format cameras don’t have built-in autofocus, so there’s no way to determine whether your photo is in focus or not. Digital photos can also be shared immediately on social media.